How Green is my Diocese??? Learning from the Villagers of Maharashtra

I have sung the hymn ‘We are happy Christians’ many times in church, but never has it lingered in my subconscious before, as it did on my return journey from the exposure programme in Nashik organised by the Archdiocesan Office for Environment, Mumbai (AOE).  It certainly was drawing my attention to a connect of the lyrics with the Green Diocese Initiative adopted by the Archdiocese of Bombay.  As Christians, united under the banner of Our Lord, we have a divine model and an earthly mentor in our effort to ‘Care for Creation’.

We belong to one family... (in our common home – Earth)

Jesus Christ has chosen us….(We are Green Warriors not by chance.  We have been chosen by the voice of our conscience to support the initiative of a Green Diocese as envisaged by Bishop Allwyn D’Silva and launched by the Archbishop Cardinal Oswald Gracias on 1st September 2018.)

From the North and… West …. (This rural exposure programme was a follow-up of the workshop in Sarvodaya, Goregaon held September 22-23, 2018, with over 50 participants. 28 participants visited the rural areas of Nashik, wherein eco-friendly practices are implemented on January 5-6 2019.)

And we are delighted… (Yes, it was fun, learning and enlightening.)

Now as Christians --- living in simplicity (We spent 2 days with the villagers and watched their simple uncomplicated, unadulterated lives, unfazed by commercials and sops.)

We must share ---- with those in need (Nature has everything and in enough measure to satisfy everyone’s need if it is not motivated by greed.)

Setting out from St John the Baptist Church, Thane, after a good breakfast, the bus headed to Gangapur Road, Nashik, to Maharashtra Prabodan Seva Mandal (MPSM), an NGO run by the Bombay province of the Jesuits.

Fr Godfrey D’Lima, the Director, explained that the drought in Western Maharashtra had left small farmers insecure, prompting their exodus to the cities in search of jobs.  The Jesuits, to the rescue, started various schemes, such as work for food, food for all, water, soil and forest conservation for sustainable agriculture. Bore wells were dug and water made available.  Later, through German collaboration, the watershed concept was introduced which is both low-cost and people-centred.    Water from rainfall, runoff and streams is caught in tanks or catchment areas called watersheds and made available to the fields.

Methods to prevent soil erosion - Bunding and contour farming have been introduced.   Organic farming has helped the farmer get not only a good protected crop but one that is free from chemical fertilisers and pesticides.  In this connection, a video demonstration showed us how seeds are treated using a mixture of cow dung, jaggery, turmeric and cow urine.  This treatment vitalises the seed, provides a protective bacterial covering, improves yield and enhances pest resistance.   Forest waste is used to prepare compost which is an organic manure.   After a simple, sumptuous lunch at MPSM, we moved on to our second destination—Taluka Peth which is 48 km away from Nashik.

Patil and Tilak, the resource persons gave us first-hand information on the Watershed pilot project covering both hilly and arid areas, converting them into lush green valleys.  Pointing out to a map painted on a wall showing the area-wise division of the taluka, we were informed that 200 villages had been beneficiaries of the Indo-German watershed project.  Initially, the villagers were not convinced about the value of the watershed project, and so the women were roped in, thereby creating more jobs and women empowerment.

We walked for about half a kilometre to see the nullah bunding built around the watershed to arrest soil erosion.  Making advantageous use of the slope of the land, run-off water was caught in dug-up trenches or watersheds.  Day One was a fulfilling experience we would never get from textbooks.  We moved to the Shrine of the Infant Jesus, where we had dinner and spent the night.

We began Day Two with mass concelebrated by Bishop Allwyn, Fr Joseph Gonsalves and Fr William (one of our hosts at the Shrine).   On the feast of the Epiphany, the three wise men came from the East in search of the baby in the manger.  The Bishop urged us to think differently, to have a change in mind-set for a better earth, a better environment in our care for Creation.

After breakfast, we moved to Harsul Village in Trimbakeshwar district, a distance of 51 km from Nashik, for a session on organic farming.  Mr Trimbakta, the resource person told us that organic farming depends on crop rotation, vermicompost manure, biological pesticides, etc.  Chemical fertilisers and pesticides cause harmful effects to people’s health and the quality of the crop is low, with yield diminishing over time.  Paddy, vegetables, fruits, nachni, vari are being cultivated under the organic farming project.   We enjoyed a simple healthy meal of rice, dal, and pulses.  They introduced us to a machine that separates the rice from the husk which is a great time saving boon to the farmers.

The villagers are a warm and hospitable people.  Two days with them, watching their eco-friendly lifestyle was a lesson in itself.  How do they keep animals at bay?  They hang a transparent bottle of a red liquid at their door.   They do not cut down a single tree.   Hence it is burial and not cremation for their dead.  Trees also help to prevent soil erosion.  Then what do they do for fire wood?  Naturally fallen twigs/ branches serve this purpose.   Dry foliage is left in situ.  It helps preserve the nutrients in the soil.  Everything they need from food and medicines to their homes and clothes is taken from nature and they use it sparingly, leaving enough for others.  They are unaware of disposables.   Hence we were served our meals and water in stainless steel plates and glasses.  They are far advanced than us in preserving and protecting the Environment.   A round of applause to the Green Diocese initiative of the Archdiocese of Bombay for the lead in organising awareness programmes to Care for Creation. 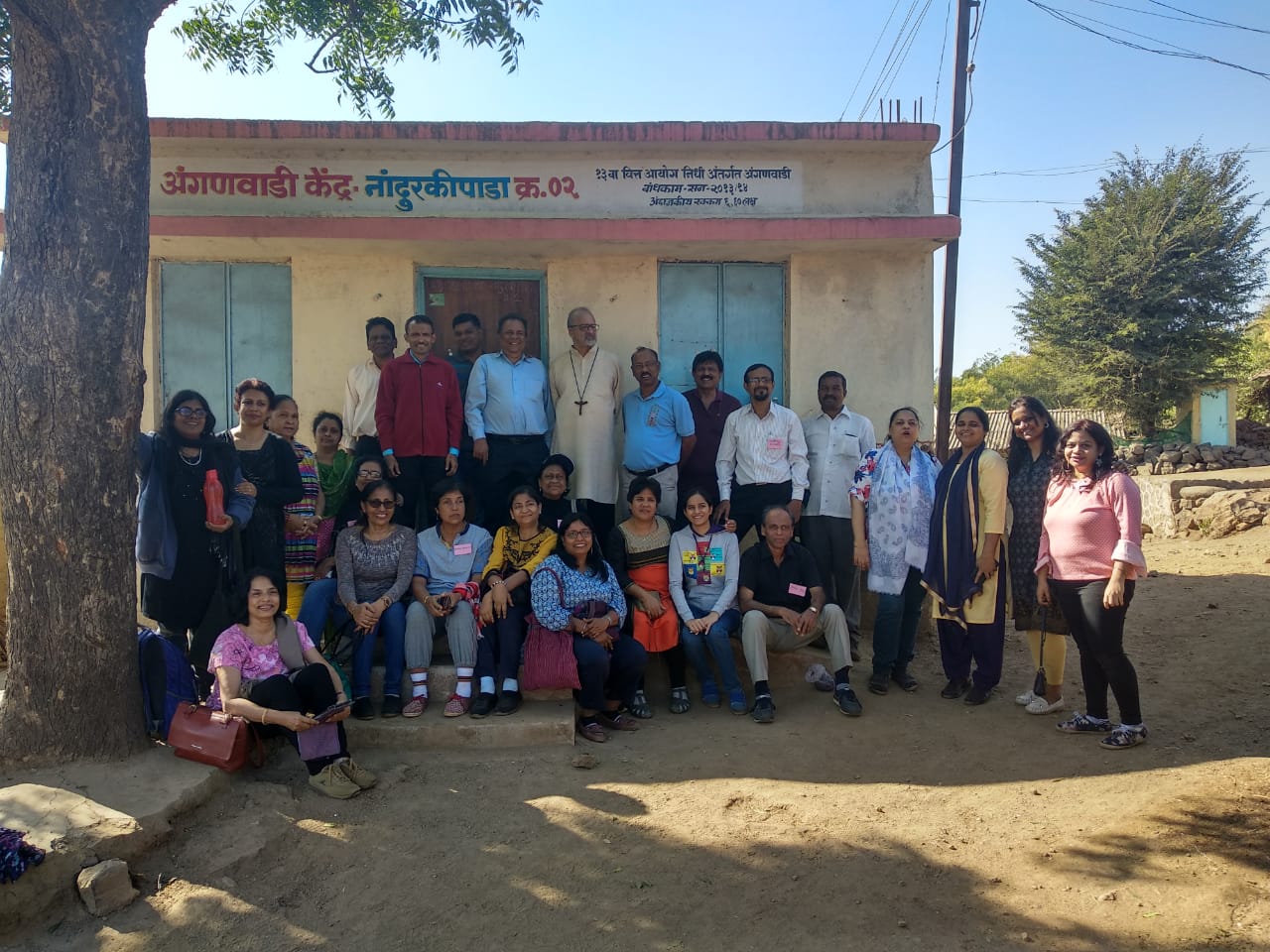